The King and the King James Bible 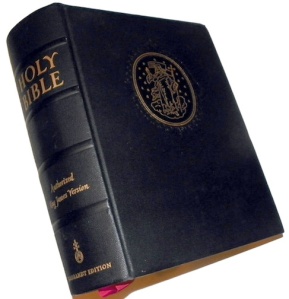 Today marks the 34th anniversary of the death of Elvis Presley. Though known primarily as a rock and roll singer, Elvis had a special love for the gospel music he’d grown up with in Tupelo, Mississippi, and Memphis, Tennessee. Performances of favorites such as “How Great Thou Art” and “Peace in the Valley” earned him his only three Grammy awards and a spot in the Gospel Music Hall of Fame. The lyrics to many such gospel songs are rooted in the language of the King James Bible.

On Sunday, my local PBS station, Maryland Public Television (MPT), aired a documentary called “He Touched Me: The Gospel Music of Elvis Presley.”  It was a joy seeing and hearing Elvis perform his gospel favorites and to hear his former bandmates recall how after their shows ended, Elvis and his band would sing gospel songs and jam for friends until the sun rose.

Elvis owned many Bibles and always kept one close by. The King James Bible pictured here, normally found in Elvis’s room in Graceland, will be on display at the Folger Shakespeare Library as a part of the Manifold Greatness exhibition. The loan approval for Elvis’s Bible came shortly after news that we would not be receiving the Abraham Lincoln/Barack Obama Bible from the Library of Congress.  We were disappointed, but completely understood the decision. And after all, we might not have gotten the President, but we got the King.

This entry was posted on August 16, 2011 by curatorsteve. It was filed under At the Folger, From the Curators, In the News and was tagged with Authorized King James Version, Elvis Presley, Grammy awards, How Great Thou Art, Maryland Public Television, Memphis Tennessee, Peace in the Valley.