The Bible and Othello

Like all of Shakespeare’s plays, Othello contains many significant allusions to the Bible, the book he could count on most members of his audience knowing best. Shakespeare most often alludes to the Geneva Bible, a copy of which he surely owned, but he also knew the Bishops’ Bible and the Coverdale Psalms from the Book of Common Prayer, since he heard them in church. (As noted in our Manifold Greatness website FAQs, Shakespeare was not influenced by the later King James Bible.)

Most people today think of Othello as a play about race. This has been a common view for decades. Indeed, U.S. President John Quincy Adams (1767-1848) thought the play a failure because of its representation of a young Venetian girl making “a runaway match with a blackamoor.” The play was a hit in the pre-Civil War South, since it offered, so it was believed, a lesson in the dangers of miscegenation. Audience react to the play differently today, but they still focus on race.

In Shakespeare’s day, before the expansion of the transatlantic slave trade, what was most risqué about Othello was not race but religion. Othello is a Christian, it’s true, but he is descended from Muslims. Shakespeare’s subtitle The Moor of Venice would have suggested Islam as well as blackness. And the conflict that threatens Venice in the play is with the Muslim Turks.

One of the most overt biblical allusions in Othello is in Iago’s early speech, when he says to Roderigo, “I am not what I am.” At first hearing, this sounds like Viola’s coy remark in Twelfth Night, “I am not that I play.” But it’s more complex.

Iago’s statement is actually logically impossible. How can anyone not be what they are? The key is that Iago is parodying God’s naming of himself to Moses in Exodus: “I am that I am.” It’s not a name, really, but a statement of God’s eternal sameness and essential being. Iago inverts this, which implies something essential unstable or even empty about him. 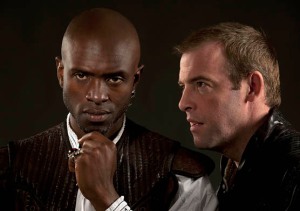 Another important reference to the Bible comes at the end of the play when Othello says that he, “like the base Judean, threw away a pearl richer than all his tribe.” (Though some editors argue for “Indian” rather than “Judean.”) The “Judean” in question is Judas, who, according to the note in the Geneva Bible (with the later “Tomson” New Testament), was of the tribe of Judah. The “pearl” Judas threw away was Jesus, whom he betrayed, and who was also of the tribe of Judah. Because he has betrayed and murdered Desdemona, Othello is thus likening himself to the greatest betrayer in Christian history.

Othello later says to Desdemona’s body, “I kiss’d thee ere I kill’d thee.” A biblical literature audience might hear this as an echo of Judas’s kiss, which identified Jesus to the chief priests and elders.

The Folger Theatre production of Othello opens October 18 and runs through November 27. Othello was performed at James I’s court in 1604, the year that work began on the 1611 King James Bible; scholars believe Shakespeare wrote the play in 1603 or 1604.

This entry was posted on October 14, 2011 by manifoldgreatness. It was filed under At the Folger, From the Curators, Influences and was tagged with Bible, Book of Common Prayer, Folger Theatre, Othello, William Shakespeare.