King James and His Bible

King James I, the royal sponsor of the Bible that bears his name, grew up as a king. After Queen Elizabeth I executed his mother, Mary Queen of Scots, when he was just one year old, he became King of Scotland and the heir to the English throne after Elizabeth’s death. He was raised by a team of Scottish Presbyterian ministers under the control of his regent, but upon his ascension to the English crown in 1603, he seemed more attuned to English religious politics.

Less than a year after his arrival in England, James officially launched the translation project that would become the King James Bible at a conference in Hampton Court Palace. The complex’s status as a favorite dwelling of King Henry the VIII, the founder of the English church, would not have been lost on the attendees.

The new translation was intended to be a unifying factor, not between Scotland and England, but between the warring factions of the Church of England. In the oversight of the project, James favored the establishment bishops, but a third or more of the 48 “Translators” (as they were known) had Puritan beliefs. Most were connected with Cambridge University, a hot-bed of Puritan theology.

The most popular Bible among English Christians at the time was the Geneva Bible, which Puritan scholars had composed in Geneva during their exile from the persecution of Queen Mary (“Bloody Mary”) in the 1550s. Its popularity had soared at the end of the sixteenth century because the Bishops Bible of 1568, the Church’s official Bible, had met with derision, As Adam Nicholson observes, it was “pompous, obscure and often laughable.” Instead of the well-known phrase “Caste thy bread upon the waters,” for instance, it gave “Lay thy bread upon wet faces.”

But James could not simply follow the people’s choice, for the Geneva Bible contained extensive interpretive footnotes, many of which were anti-monarchical, denying that kings and queens had the right to rule. Given that in 1598 James had written a ringing defense of the “divine right of kings” to govern in his “True Law of Free Monarchies,” this was an anathema.

The new Bible translation would draw upon the best of these two works, while going back to the best Hebrew and Greek manuscripts then available. It would undergo several stages of review to ensure both accuracy and understandability. It would be both a pulpit Bible and a people’s Bible: pleasant to read aloud and to oneself.

The new translation did not immediately gain acceptance when it was published in 1611. Like the Greek Septuagint, the Latin Vulgate and many modern translations, people preferred the versions with which they were familiar. But within a few decades it had replaced the Bishops Bible and surpassed the Geneva Bible. It was brought across the Atlantic and became America’s Bible, both for English churches that came here and the churches that originated here, such as the Mormons.

The King James Version was the dominant English-language Bible for 350 years and had no significant rivals until the Revised Standard Version appeared in the 1950s. Since then, many new translations have been published, but the KJV remains the most popular book in the English language.

In celebration of the 400th anniversary of the KJV, the University of Wyoming is hosting an exhibit and series of six lectures during October. It will open on Sunday afternoon, October 7th, with a talk by Dr. Philip Stine, a former translator and executive of the United Bible Societies, who will discuss the origins and impact of the KJV.

The exhibit is called “Manifold Greatness: The Creation and Afterlife of the King James Bible,” and is located in Coe Library. It was created by the Folger Shakespeare Library , in partnership with the University of Oxford and the Harry Ransom Center, and with support from the National Endowment of the Humanities and the American Library Association.

To accompany this, the Toppan Library of the American Heritage Center is exhibiting Bibles from its rare books collection, and the Albany Country Public Library is hosting a display of Bible translations through the ages. For more information, go to https://uwlibblogs.uwyo.edu/dustyshelves/manifold-greatness-the-creation-and-afterlife-of-the-king-james-bible/.

Paul V.M. Flesher, Ph.D. is the Director of the Religious Studies Program at the University of Wyoming. The Manifold Greatness traveling exhibition is on view at UW from October 7-31, 2012.

Before the KJB: The Coverdale Bible 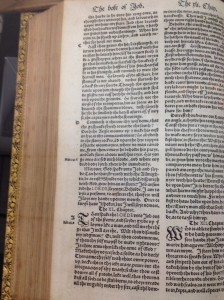 A passage from the book of Job in the Coverdale Bible, 1535. Image courtesy of the University of Dayton.

After opening our local Manifold Greatness exhibition on August 24, we were contacted by a local collector, Stuart Rose, who offered to lend to us his first edition Coverdale Bible.  The Coverdale Bible was printed in 1535 and is the first complete English Bible ever printed, as well as the first full Bible in modern English.

We removed the 1838 reprint edition that we had planned to show for the exhibition, featured in our case of early translations of the Bible, and replaced it with the real thing. The following information is from the Sotheby’s catalog listing for this particular book.

BIBLIA: The Bible, that is, the holy Scripture of the Olde and New Testament. 1535. First Edition in English of the Complete Bible, 307 x 197 mm. Handsome 19th century morroco gilt by Francis Bedford. The Earl of Crawford-John William Pease-Lord Wardington Copy.

Such copies of the Coverdale Bible have appeared for sale in the past 50 years are invariably incomplete. This copy is in fact one of the most complete copies offered during this time period — lacking only one leaf of text proper (the other lacking leaves being prelims).

The Coverdale Bible is much rarer than the first printing of the 1611 King James Bible and is known to be 3 or 4 times rarer than the First Folio of Shakespeare. University of Dayton Libraries is excited to present this rare and magnificent book. Special thanks to Mr. Stuart Rose for sharing this  early translation with Manifold Greatness visitors.