A post about the Book of Common Prayer—the source of such familiar phrases as “ashes to ashes, dust to dust”—recently appeared on the Folger Shakespeare Library blog, “The Collation,” and we wanted to share a short excerpt here. First produced in 1549 (see this web page for details), the Book of Common Prayer has gone through different editions over time. In 1649, Charles I was beheaded. After his son, Charles II, was restored to the throne in 1660, a new edition was published in 1662. Whitney Trettien has been studying an intriguing Folger copy of a 1664 Book of Common Prayer with numerous added images; you can read her full blog post (with a wealth of other images) on the Collation blog:

In Henry Fielding’s novel Tom Jones (1749), Partridge and his friends go to see a play. As they watch a man light the upper candles of the playhouse, the predictably inane Partridge cries out, “Look, look, madam, the very picture of the man in the end of the common-prayer book before the gunpowder treason service!”

The picture Partridge refers to is most likely the one at left, a widely circulated and often reproduced image of Guy Fawkes sneaking toward the House of Lords, matches and lantern in hand. It’s easy to read Partridge’s bumbling analogy as a comedic misinterpretation of the seriousness of the Gunpowder Plot—after all, he seems to see no difference between a flame intended to ignite barrels of gunpowder and one used to light candles in a playhouse (!).

There’s a second level to his comedy, though, lost to most modern readers: namely, that by the eighteenth century this iconic depiction of Fawkes simply was as common as lit chandeliers. Found interleaved in many (if not most) extant post-1662 copies of the Book of Common Prayer, this image, along with another showing Charles I’s execution and a third celebrating Charles II’s return, iconically punctuated the state services added to the end of the restored Prayer Book.

While the Folger holds many fine examples of extra-illustrated Prayer Books, I’ve been researching a copy that makes particularly interesting use of the practice of interleaving liturgical texts with images. Like many others compiled in the seventeenth century, this Prayer Book is bound within a collected volume that includes several religious texts, including a Bible, a copy of Sternhold and Hopkins’s Psalms, an Apocrypha, John Speed’s genealogical tables, and John Downame’s concordance.

Unlike other composite volumes, however, this book—really, an aggregate of multiple printed books bound together—is heavily interleaved with loose prints, diagrams, maps, illustrations extracted from other texts, contemporaneous portraits of religious and political figures, even an elaborate (and as-yet unidentified) manuscript monogram.

In fact, most of the leaves of the Bible in this copy have been removed and replaced with images culled from different sources, including William Slatyer’s illustrations of Genesis (a set of 40 plates published in the 1660s) and an unidentified German book, possibly some form of illustrated Bible that includes scriptural passages in both German and Latin. In short, the owner(s) of this volume went far beyond the standard practice of interleaving one’s Prayer Book with a few ready-made prints of Guy Fawkes!

If (returning to Tom Jones) Partridge’s offhand remark satirizes how common images of the Gunpowder Plot had become, then the volume at the Folger indicates how uncommonly such images could be used. Through a highly material process of cut-and-paste composition, the owners of this book transformed a set of mass-reproduced religious texts into a wholly new document that uniquely reflects—or perhaps carefully projects—their political and religious affiliations.

Whitney Anne Trettien is a PhD candidate in English at Duke University, where she is writing her dissertation on the Little Gidding Harmonies. She works on a variety of projects related to book history, digital humanities, and early modern material culture. As noted above, you can read the rest of her blog post here.

To learn more about extra-illustrated books, you may want to explore the online content for a past Folger exhibition, Extending the Book: The Art of Extra-Illustration, which includes this volume. You can learn more about the November 1605 Gunpowder Plot here.

On April 13, 1742, a new oratorio by the famous composer George Frideric Handel made its debut in Dublin, Ireland.

The performance was held to benefit three local charities:  prisoners’ debt relief, the Mercer’s Hospital, and the Charitable Infirmary.  The Dublin News-Letter provided an early critique on the work, praising the oratorio as “…far surpass[ing] anything of that Nature which has been performed in this or any other Kingdom”.

Handel’s Messiah has continued to be performed ever since. Its librettist, Charles Jennens, drew from the King James Bible for his text, with one exception: lines from the psalms are taken from Miles Coverdale’s earlier translations in the Book of Common Prayer.

To hear excerpts from Messiah, with information on their KJB connections, please enjoy the Handel’s Messiah interactive feature on the Manifold Greatness website. More information on Handel himself appears in this previous post.

Amy Arden assisted in the development and production of the Manifold Greatness website. She is a communications associate at the Folger Shakespeare Library.

The Bible and Othello

Like all of Shakespeare’s plays, Othello contains many significant allusions to the Bible, the book he could count on most members of his audience knowing best. Shakespeare most often alludes to the Geneva Bible, a copy of which he surely owned, but he also knew the Bishops’ Bible and the Coverdale Psalms from the Book of Common Prayer, since he heard them in church. (As noted in our Manifold Greatness website FAQs, Shakespeare was not influenced by the later King James Bible.)

Most people today think of Othello as a play about race. This has been a common view for decades. Indeed, U.S. President John Quincy Adams (1767-1848) thought the play a failure because of its representation of a young Venetian girl making “a runaway match with a blackamoor.” The play was a hit in the pre-Civil War South, since it offered, so it was believed, a lesson in the dangers of miscegenation. Audience react to the play differently today, but they still focus on race.

In Shakespeare’s day, before the expansion of the transatlantic slave trade, what was most risqué about Othello was not race but religion. Othello is a Christian, it’s true, but he is descended from Muslims. Shakespeare’s subtitle The Moor of Venice would have suggested Islam as well as blackness. And the conflict that threatens Venice in the play is with the Muslim Turks.

One of the most overt biblical allusions in Othello is in Iago’s early speech, when he says to Roderigo, “I am not what I am.” At first hearing, this sounds like Viola’s coy remark in Twelfth Night, “I am not that I play.” But it’s more complex.

Iago’s statement is actually logically impossible. How can anyone not be what they are? The key is that Iago is parodying God’s naming of himself to Moses in Exodus: “I am that I am.” It’s not a name, really, but a statement of God’s eternal sameness and essential being. Iago inverts this, which implies something essential unstable or even empty about him.

Another important reference to the Bible comes at the end of the play when Othello says that he, “like the base Judean, threw away a pearl richer than all his tribe.” (Though some editors argue for “Indian” rather than “Judean.”) The “Judean” in question is Judas, who, according to the note in the Geneva Bible (with the later “Tomson” New Testament), was of the tribe of Judah. The “pearl” Judas threw away was Jesus, whom he betrayed, and who was also of the tribe of Judah. Because he has betrayed and murdered Desdemona, Othello is thus likening himself to the greatest betrayer in Christian history.

Othello later says to Desdemona’s body, “I kiss’d thee ere I kill’d thee.” A biblical literature audience might hear this as an echo of Judas’s kiss, which identified Jesus to the chief priests and elders.

The Folger Theatre production of Othello opens October 18 and runs through November 27. Othello was performed at James I’s court in 1604, the year that work began on the 1611 King James Bible; scholars believe Shakespeare wrote the play in 1603 or 1604. 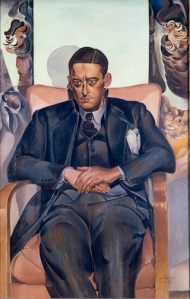 The Nobel Prize winning poet and playwright Thomas Stearns Eliot was born 123 years ago today, on September 26, 1888, in St. Louis, Missouri. Eliot grew up in St. Louis and went to college at Harvard. After graduate studies at Harvard, the Sorbonne, and Merton College, Oxford, he ultimately settled in England. In 1927, he became a British citizen and converted to the Anglican Church. T.S. Eliot died in England in January 1965.

Many of T.S. Eliot’s poems, including The Waste Land (1922), draw on the King James Bible, but his later works, including Ash Wednesday (1930) and The Four Quartets (1945) are especially rich in biblical language and ideas.

Learn more about Eliot and the King James Bible (as well as the KJB’s influence on eleven more writers, from John Milton to Marilynne Robinson) through the Literary Influences timeline on the Manifold Greatness website. In the case of Eliot, the timeline uses Ash Wednesday as an example of the ways in which Eliot’s language is enriched by, and sometimes borrows from, the King James Bible, citing particular passages from the poem and the Bible, as well as the Book of Common Prayer.

On April 13, 1742, a new oratorio by the famous composer George Frideric Handel debuted in a music hall in Dublin, Ireland. Handel’s Messiah has continued to be performed ever since, a perennially popular work that offers many concertgoers their most regular, and likely their most full-throated, exposure to the text of the King James Bible. Its librettist, Charles Jennens, assembled most of the words from the KJB, with one exception: lines from the psalms are taken from Miles Coverdale’s earlier translations in the Book of Common Prayer.

In celebration of April 13, we’ve assembled a new “Handel and the KJB” Flickr slideshow that combines a rare early surviving “word book” of Handel’s Messiah from the Folger Shakespeare Library with a look at modern sing-along holiday performances of the work, a tradition in many churches and communities. To hear excerpts from Messiah, with information on their KJB connections, please enjoy the Handel’s Messiah interactive feature on our brand-new Manifold Greatness website.

And yes, the premiere really was April 13. We even found this marker!