After an event-filled tour that has criss-crossed the United States since the fall of 2011—including, most recently, exhibits in Bel Air, Maryland; Danville, Kentucky; and Tifton, Georgia—Manifold Greatness is ready to open at its final exhibit site. The 40th of its 40 locations in 27 states is the Nancy Guinn Memorial Library of the Conyers-Rockdale Library System in Conyers, Georgia, where Manifold Greatness will be on view from tomorrow, May 29, through July 12.

As detailed in the library’s brochure below, the Conyers display includes a wealth of programs this June. To see what’s coming, including photos of some intriguing local Bibles that will also be on exhibit, read this preview in the Rockdale Citizen. You can also check out the library’s website or its Facebook page. (To examine the brochure at larger size, just select the page you wish to read.)

Praise for Manifold Greatness, the book 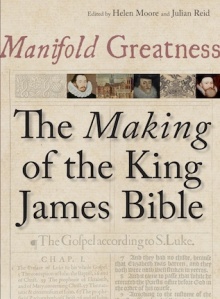 Named “Pick of the Day” on the Bookshop page of the London Times last Friday, Manifold Greatness: The Making of the King James Bible also got a nice review from the Times earlier in the week, on April 9, which described it as: “the beautifully presented and scrupulously edited Manifold Greatness… erudite but never dull,” memorably adding, “Go thou forth and buy it!’” (Update: Sorry, we couldn’t include the direct link here, given the Times site’s restricted paid access.)

Just out from Bodleian Library Publishing, Manifold Greatness is a richly illustrated, accessible account of the creation and afterlife of the King James Bible, told through chapters written by leading scholars who include the curators of the Bodleian and Folger Manifold Greatness exhibitions.

Chapters include the context for the translation, its impact in England, and its reception and cultural influence in America, from the 1600s to the present day. There’s also a chapter on rare KJB-related materials at the Folger Shakespeare Library. Images range from rare early English Bibles to the Algonquin Bible of 1663, Harper’s Illuminated Bible of 1846, and much more.