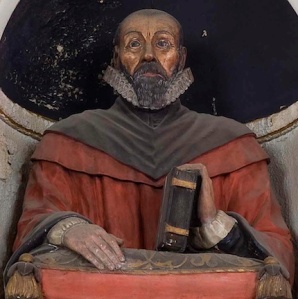 John Rainolds, President of Corpus Christi College, Oxford from 1598 to 1607, was the leader of the Puritan delegation to the Hampton Court Conference in 1604. It was at this conference that Rainolds suggested to King James I that there should be a new translation of the Bible.

Rainolds was born on September 29, 1549, in Pinhoe in Devon. His father was a farmer, and his five brothers all studied at Oxford University. In 1572 Rainolds became reader in Greek at Corpus Christi, where he had studied as an undergraduate, and in 1588 he moved to the Queen’s College, where he lectured in theology. Amongst his surviving papers in Oxford are his lecture notes on Aristotle’s Rhetoric, and notes he made concerning the study and interpretation of the Hebrew scriptures.

Rainolds was a member of the First Oxford company that translated the Old Testament prophets for the King James Bible. This company met weekly in Rainolds’s lodgings in Corpus. Despite being afflicted by failing eyesight and gout, Rainolds continued the work of translation to the last, even being carried into the meeting room. He died on Thursday 21 May 1607, and was remembered as a leading figure of reformed theology, an accomplished Hebraist, and a man of remarkable learning. Rainolds is buried in the chapel of Corpus Christi.

Helen Moore is Fellow and Tutor in English at Corpus Christi College, Oxford, and chair of the curatorial committee for the ‘Manifold Greatness’ exhibition at the Bodleian Library, Oxford.

May 20, 2011 | Categories: At the Bodleian, From the Curators, The KJB in History | Tags: Corpus Christi College Oxford, First Oxford Company, John Rainolds, University of Oxford | Leave a comment

Manifold Greatness at the Bodleian: the first week

‘Manifold Greatness: Oxford and the Making of the King James Bible‘ opened, appropriately enough, on Good Friday, April 22, and welcomed nearly a thousand visitors across the Easter weekend. The week before the opening was in many ways revelatory, as the books were arranged in the cases, the loaned items arrived, and the panels were set in place. It was inspiring to see the exhibition taking shape before our eyes, as real books took the place of sketches, and the ‘conversation’ that we had envisaged between the different items in each case began to take shape. It was also humbling: this exhibition is the first time that some of these books have been reunited in one room since they were used by the King James translators.

It was remarkable to see the panel designs becoming a physical reality. The team has for the first time used banners as part of the room design for this exhibition: two huge banners hung at opposite ends of one wall feature the Old and New Testament title pages of the 1611 King James Bible.

Between them is a portrait of King James, which is itself framed by two banners carrying verses from 1611: one from the Old Testament, as translated by the First Oxford Company (Isaiah 49:13) and one from the New Testament, as translated by the Second Oxford Company (Revelation 19:6). For these banners I chose verses that not only resonate poetically, but that also address one of the key themes of the exhibition – the many voices of the King James Bible.

Written by committees, the KJB re-uses many words and phrases from earlier translations, and its own words were adapted in poetry and fiction by the later writers such as George Herbert, John Milton and Daniel Defoe who feature in our exhibition. So these two verses from Isaiah and Revelation capture for me not only the majestic, collective voice of heavenly rejoicing, but also this idea of the many voices involved in Bible translation and reception: 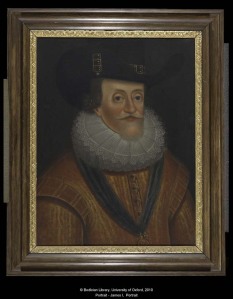 Portrait of King James I, Bodleian.

Sing, O heaven, and be joyfull, O earth, and breake forth into singing, O mountaines: for God hath comforted his people, and will have mercy upon his afflicted. (Isaiah 49:13)

Helen Moore chairs the curatorial committee of the Bodleian ‘Manifold Greatness’ exhibition.  She is Fellow and Tutor in English at Corpus Christi College, Oxford.