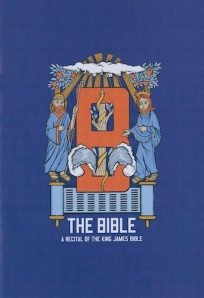 The Bible at the Globe. Courtesy Carol Kelly.

“The King James Bible was written to be read aloud. It was a performance text or it was nothing.” This stirring declaration by David Hall, head of classics at Dollar Academy, in his essay in the theater program shown here, suggests one reason behind the plethora of nationwide and worldwide recitals of the KJB in the last few months, including this one at the Globe in London that covered the entire text. The setting provided the perfect link with Shakespeare, whose plays, too, were written to be performed, not read.

I attended the Easter Sunday afternoon recitals of the Gospels according to St. Luke and St. John at the Globe. Four actors, two male, two female, took it in turns to recite the entire texts, in sections of about ten to fifteen minutes each. I wasn’t sure what to expect in terms of visuals—I was hoping they wouldn’t have someone reciting from a pulpit dressed in Jacobean clothes! In fact, the four young actors were casually dressed, which added not only a comfortable informality to the proceedings but also seemed a good way to reinforce the notion that this Bible still speaks to us today, just as it did four hundred years ago. The text was piped discreetly into their ears with the help of i-players but this did not detract at all from their delivery, which was engaging and fluent. The actors moved around the empty stage, at times addressing the audience, at times delivering their lines to the whole cosmic world with clarity and thought-provoking intensity. They brought out the wonder of the words but also the humor and humanity behind the familiar stories. 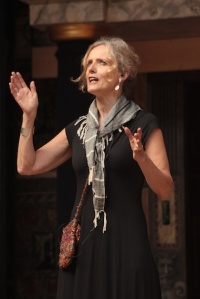 The recital was designed so that people could come and go freely, and folks taking the tour of the Globe that day were ushered in and out to sample a short section of the recital. I was apprehensive about being able to sit for four hours on a seat with no back, listening to a recital with minimal visuals, but it was far from being a challenge.

The Gospel according to St. John seemed particularly suited to the young actors’ talents. Although not one word was cut, the recital had been carefully structured so that each section ended on a poignant moment or on a passage that was memorable such as, “And if any man hear my words, and believe not, I judge him not: for I came not to judge the world, but to save the world.” (John 12:47)

The experience made me appreciate not only the power of those words, but also the human voice as an instrument of communication. I thought of seventeenth-century churchgoers hearing the King James Bible for the first time. This recital brought the words to life, where they belong.

Carol Kelly is the Festivals Project Coordinator for the Education Department of the Folger Shakespeare Library, Washington, DC. As she notes here, she attended the April 24, 2011, afternoon performance of the Shakespeare’s Globe read-through of the entire King James Bible, which we previewed in this earlier post.