John Bunyan, best known for his enormously influential book, The Pilgrim’s Progress from This World, to That Which is to Come (1678), died on August 31 in 1688. The Folger Manifold Greatness exhibition, opening this September, includes this 1680 edition of Pilgrim’s Progress from the Folger Shakespeare Library collection. These pages put the emphasis on Bunyan (the large figure at left) and his “dream” of the pilgrim Christian’s journey. Christian is the small figure above Bunyan’s head.

Learn more about Bunyan, the importance of Pilgrim’s Progress, and other works influenced by the King James Bible through the Literary Influences timeline at the Manifold Greatness website. 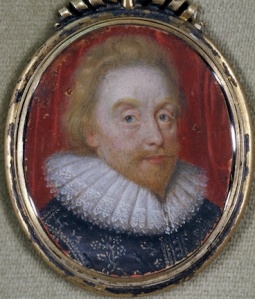 Happy Birthday King James! James I of England, whose birthday is this Sunday, June 19, is the “King James” of the King James Bible. He became King James VI of Scotland at the age of one in 1567, after his mother, Mary (Queen of Scots) was forced to abdicate. Mary was implicated in the death of her second husband (and cousin), Henry Stuart, Lord Darnley, James’s father. As retold in novels, plays, opera, and films, Mary herself was imprisoned, and eventually beheaded, by her cousin (once removed), Elizabeth I of England. When Elizabeth died in 1603, James inherited her throne. One weirdness in this succession is that James inherited the crown from the queen who executed his mother, but since Mary was likely involved in the murder of his father, he probably had mixed feelings about her death.

When James came down from Scotland, his new English subjects were naturally concerned about their new king’s religious views and the future of church organization and worship in England. To settle matters, James convened a conference in January of 1604 at the palace of Hampton Court. Though it was not on the agenda, the project for a new translation of the Bible originated in these discussions.

Despite popular misconceptions, James himself had little to do with the translation, apart from setting it in motion,and providing it with royal sanction. (The translators prominently dedicated it to him, too.) He was a learned monarch, deeply engaged with theological questions, and he wrote a number of metrical versions of Psalms. But his learning was not up to the level of the translators.

His one area of contribution to the translation was in shaping the guiding principles for the translators (written by Archbishop Richard Bancroft), especially in the decision to avoid marginal interpretative notes. Such notes had been a popular feature of the Geneva Bible, but a number of these, written by Protestant exiles during the reign of Queen Mary, were sharply critical of monarchs. The King James Bible, as it came to be known, was to be free of such a radical taint. Little did James know that the Bible he sponsored would become the Bible of the radicals John Milton, John Bunyan (author of Pilgrim’s Progress, right), and William Blake, as well as of America, the British colonies that threw off their king to become a democratic republic.