Saul and the Witch of Endor 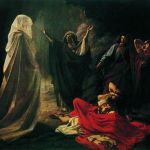 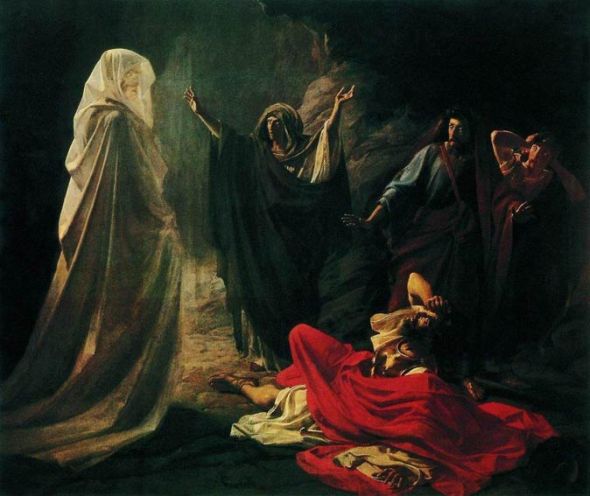 Nikolay Ge. The Witch of Endor Calling Up the Spirit of the Prophet Samuel. Painting, 1875.

You won’t find vampires and werewolves in the King James Bible, but witches (referred to as mediums) and spirits rising from the grave are mentioned. One famous incident occurs in the book of 1 Samuel, when Saul, King of Israel, secretly contacts a woman with powers for summoning the dead. Her name is not given in the story, although in popular culture, she has become known as the witch of Endor.

According to the Biblical account, the prophet Samuel is instrumental in making Saul king of Israel, and continues to provide counsel during Saul’s reign.  After Samuel dies, Saul faces an enormous threat from an army of Philistine soldiers assembled to attack Israel. Saul’s prayers and attempts to seek divine aid are unsuccessful.

Desperate for advice, Saul disguises himself and seeks out a medium. Although she expresses reluctance at first, she eventually agrees to summon the spirit of Samuel for Saul.

Things go downhill from there.

And Samuel said to Saul: ‘Why hast thou disquieted me, to bring me up?’ And Saul answered: ‘I am sore distressed; for the Philistines make war against me, and God is departed from me, and answereth me no more, neither by prophets, nor by dreams; therefore I have called thee, that thou mayest make known unto me what I shall do.’ 1 Samuel 28:15

Samuel foretells that Saul will be defeated in the upcoming battle, and that he and his sons will be killed. These prophecies come true, and Israel suffers a crushing defeat, after which Saul commits suicide.

Amy Arden assisted in the development and production of the Manifold Greatness website and Family Guide. She is a Communications Associate at the Folger Shakespeare Library in Washington, DC.