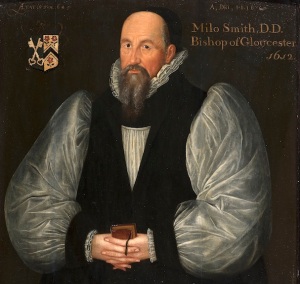 Back in 2009, when we first started working on Manifold Greatness, we identified a number of themes we wanted the exhibition to touch on, and one of those was the nature of translation. In our grant proposal, we talk about how translation is a true literary act, one that requires choices in tone, style, vocabulary, and emphasis, and how translation is a process of culture adapting, changing, and potentially growing. On our main website, we note that the translation of the KJB was, above all, a collaboration.

The Manifold Greatness traveling panel show is now on the way to its final location, the Conyers-Rockdale Library System in Conyers, Georgia, where it will appear, with much related programming, from May 29 to July 12. And as this touring phase comes to a close, I’ve been looking back at our own process, and thinking about the way in which exhibitions themselves are a process of translation. Of course we collaborate—anyone who has worked on an exhibition can tell you that it is one of the most collaborative undertakings they have experienced. But because we tend to think of translation as a text moving from one language into another, it’s not immediately obvious that the work we do in exhibition is also a process of translation. And yet, on many levels, I think it is. 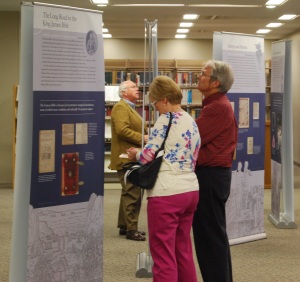 We begin with an idea, and shape it into a narrative: here is our story; here is what can be said about the history of the King James Bible. But as scholars, our curators have a certain language, a way of packaging their knowledge. This does not always (ahem) translate well to an audience which may be made up of everyone from schoolchildren and educators to tourists or subject specialists. We need a way of speaking, and of writing, that provides information accurately and succinctly, and in accessible nuggets for a broad range of audiences.

For Manifold Greatness, we did this twice: once for the artifact-based exhibition in Washington, DC, and again for the panel exhibition that traveled the country. For these, we needed two different “languages.” The Washington, DC, show was in the language of artifacts, showing the here and now, and revealing KJB stories through what could be seen on the open pages before a visitor. The traveling show retracted the lens a little further, and gave weight to story over object. We covered the same material, but we translated the content in slightly different ways in order to best serve the format of the shows. 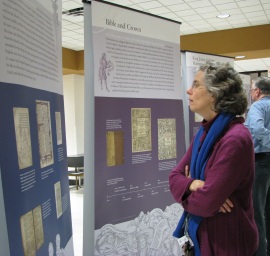 Courtesy of the University of Minnesota

I like to think that the KJB translators would have appreciated our process. Our translation process was, like theirs, concerned first and foremost with accuracy. Every word needed to be true; each idea needed to be formed and informative. We were not reading Hebrew, Greek, and Latin—but remember, of course, that the King James Bible was not the first English Bible, and the translators drew liberally from the English translations that came before. Although they produced a masterpiece of English literature, their concern was not for lyricism or rhetorical power; they aimed for accuracy as they translated both from ancient languages and from previous English versions.

Have a look at the website to compare translations, and see for yourself how the KJB translators ended up creating a new version at once lyrical and accurate. One of my favorites is the passage from Ecclesiastes (1:2), in which the translators don’t really change the meaning or emphasis from the previous English translation, but they manage to create a verse that is poetic, song-like, and memorable—and also just that much more true to the original Hebrew:

Great Bible (1539)
All is but vanity (saith the Preacher) all is but plain vanity.

Would that our exhibit text was as memorable as that! Perhaps it is indeed vanity to compare our process to that of the King James Bible translators. But as we near the end of this commemorative exhibition, I’m very pleased to have been part of such a process, to understand it, and to see the many thousands of people we have reached through the work that we did to turn ideas into language, and to use language to deliver the right information.

Caryn Lazzuri is the Exhibitions Manager at the Folger Shakespeare Library. 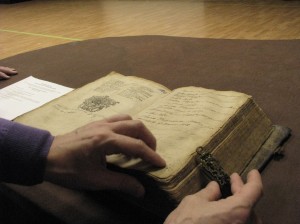 A family Bible owned by Tim Strand, published in 1684 in Copenhagen. Photo by Susan Gangl.

On February 5, a “Share Your Bible” workshop for adults and children encouraged participants to share family Bibles and memories. William Carey University is also showcasing family Bibles, and has photographs of many of these heirlooms on display along with the Manifold Greatness traveling exhibition.

To view photos of events at William Carey University and the University of Minnesota, please visit Flickr.

Amy Arden is a communications associate at the Folger Shakespeare Library. The Folger partnered with the Bodleian Library, University of Oxford, and the Harry Ransom Center at the University of Texas at Austin, to produce Manifold Greatness: The Creation and Afterlife of the King James Bible.

A quick overview of what’s on right now… and what lies ahead:

And that’s not all! During 2012 and 2013, the Manifold Greatness traveling exhibition will be displayed at another 31 libraries around the United States, each of which—like all of the host institutions so far—plans multiple public programs. Many are exhibiting rare works from their own collections as well. Try our traveling exhibition schedule to follow the travels of the panel exhibition in the months and years ahead.