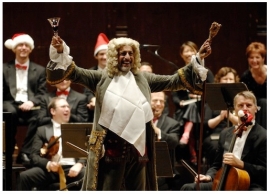 Happy Birthday, Walter! Walt Whitman’s Leaves of Grass is deeply indebted to the King James Bible, despite Whitman’s claims to be utterly original. In fact, Whitman wrote of his work as “the Great Construction of a New Bible.” The first, slim, volume of Leaves of Grass was published in 1855. Whitman paid for it himself, and there were fewer than 800 copies. The rest of Whitman’s poetic life was spent revising and adding to this collection, culminating in the final “Deathbed” edition of 1891. The original 95 pages had swollen to almost 450, and the 12 poems of the 1855 edition had become nearly 400.

Various explanations have been offered for Whitman’s title, “Leaves of Grass,” including the obvious pun on the “leaves” of a book. But somewhere in the background is probably the statement of Isaiah that “All flesh is grass, and all the goodliness thereof is as the flower of the field: The grass withereth, the flower fadeth: because the spirit of the LORD bloweth upon it: surely the people is grass” (Isaiah 40:6-7). Isaiah’s grim prophecy of death is transformed by Whitman into a celebration of the natural cycle, in which death is part of life and the poet, like all the people he sings of in his poem, returns to the earth from which he came. As Whitman writes in “Song of Myself,” “I bequeath myself to the dirt to grow from the grass I love,/ If you want me again look for me under your boot-soles.” 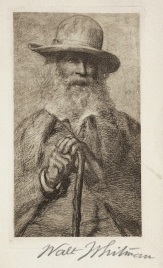 One striking feature of Whitman’s poetry is his rambling but rhetorically powerful prose-poetic line, often full of lists of people, places, and things. He adapts this line, just as William Blake did before him (and Alan Ginsberg after), from the parallelistic prose of Isaiah and other Old Testament prophets, in the King James Version. Leaves of Grass may be a new American Bible, but in some ways it sounds a lot like the old one.

Hannibal Hamlin, associate professor of English at The Ohio State University, was co-curator of the Manifold Greatness exhibition at the Folger Shakespeare Library.

Note: You can read (or hear) about the Whitman engraving shown here on the web page Personalizing Shakespeare, by Louis B. Thalheimer Head of Reference Georgianna Ziegler.

William Blake, who died on August 12 in 1827, was one of English literature’s most eccentric poets. Even the word “poet” doesn’t fit him very well, since he was also a painter, an engraver, and a printer, and many of his works were really multimedia productions, with words, images, and designs all working together to one aesthetic effect. Blake was also a radical in politics and religion, resisting hierarchy, authority, and inequality wherever he perceived it, in the State, the Church, or the Book of Genesis. Blake was a religious poet who strove to overturn traditional religion, a biblical writer who rewrote the Bible. The God of Genesis, for Blake, was an authoritarian tyrant, and Satan’s rebellion against him was not sinful but heroic. For Blake, who considered himself a Christian, Christianity was about forgiveness, not morality. And forgiveness did not depend upon God or the Church but was to be exercised by everyone. True divinity was within every individual.

The Marriage of Heaven and Hell, a page of which is shown here, is an early work (c.1790-93) that shows how deeply Blake was indebted to both the ideas of the Bible and the language of the King James Bible translation. In this section, “Proverbs of Hell,” Blake imitates the style and diction of the Old Testament Proverbs, but resists biblical ideas of wisdom and morality; Blake’s “Hell” is really his view of Heaven, an inversion of the traditional Christian one. Thus, for Blake, “The nakedness of woman is the work of God,” and “Prison are built with stones of Law, Brothels with bricks of Religion.” However radical his ideas, Blake’s parallelistic rhetoric is traditionally biblical. Also like the biblical Proverbs, Blake’s are sometimes gnomic or riddling, suggesting mysteries that need puzzling out: “The bird a nest, the spider a web, man friendship.”

Blake’s use of what today we would call prose poetry, borrowed from the lines of Isaiah and Jeremiah in the King James Bible, influenced the similar styles (if different thinking) of later American poets Walt Whitman and Alan Ginsberg. In fact, Blake’s reputation as poet and artist is considerably higher in the twentieth and twenty-first centuries than it was in his own day, perhaps partly because his rare, hand-printed and -colored works can now be widely reproduced.

Read more about the influence of the King James Bible on a variety of literary works in the Literary Influences timeline on the Manifold Greatness website.