Looking Back, and Far Ahead

I’m writing this from Borough High St. in Southwark (London), a few blocks from Southwark Cathedral, and in the vicinity of what used to be Winchester Palace, the London residence of the Bishop of Winchester. Lancelot Andrewes, translator of the King James Bible and perhaps supervisor of the First Westminster Company, was granted the bishopric in 1618. He is buried in Southwark Cathedral and is represented in effigy lying on top of his tomb.

London is full of reminders of the translation of the English Bible. Across London Bridge, which is just up the road and on the right, is the church of St. Magnus Martyr. Miles Coverdale, who translated the first complete English Bible (apart from the Wycliffites), is buried there, since he served for a time as rector.

William Tyndale, translator of translators, is buried in Vilvoorde in the Netherlands, where he was strangled and burned, but his sculpted head is included as a decorative architectural feature at St. Dunstan-in-the-West, where he lectured. John Donne later preached at St. Dunstan’s.  A little south of St. Paul’s, where Donne was dean, stood the church of Holy Trinity the Less, destroyed in the Great Fire. John Rogers, the man responsible for Matthew’s Bible (1537), was rector there a few years earlier. He was later burned alive as a heretic at Smithfield, a 10 minute walk north, near the church of St. Bartholomew the Great. Benjamin Franklin worked briefly for a printer in the Lady Chapel of St. Bart’s.

Of course, Westminster itself, the location of two companies of the King James Bible translators, is down the Thames to the west. Thomas Bilson, Bishop of Winchester (before Andrewes), member of the Second Cambridge Company, and one of the revisers of the final King James Bible text, is buried in Westminster Abbey, as is, of course, King James I. Archbishop Matthew Parker, who supervised the translation of the Bishops’ Bible (1568), is buried at Lambeth just across the Thames.

The celebrations of the King James Bible anniversary have died down here. There are no upcoming events listed on the website of the King James Bible Trust. And in the United States, the tour of Manifold Greatness comes to end on July 12—oddly enough, my birthday. Perhaps more appropriately, it is the date of the death of Erasmus (1536), who produced the Greek text of the New Testament that became known as the Textus Receptus, an essential resource for translators from William Tyndale to the King James Bible companies.

As I reflect on the long history of Manifold Greatness, from its inception and planning, to the years of research, to the exhibition at the Folger, to the long journey of the panel exhibitions, I wonder what lies ahead for the King James Bible in 2111. Will the 500th anniversary be celebrated as were the 400th and the 300th? Will the King James Bible still be in use in some churches? Will American presidents still be sworn in on it? Will the King James Bible have an afterlife in the 21st century? Will some lecturer refer back to the 2011 anniversary celebrations at the Folger, as I referred in my opening lecture to celebrations in New York and London in 1911? Few of us will know. As Matthew writes, “of that day and that hour knoweth no man, no, not the angels which are in heaven, neither the Son, but the Father.”

Hannibal Hamlin, associate professor of English at The Ohio State University, was co-curator of the Manifold Greatness exhibition at the Folger Shakespeare Library.

The KJV Trail in London

My trip to London (see earlier posts) wasn’t focused on the Bible but English literature—Dickens, The Beggar’s Opera, Shakespeare, Wordsworth—but we crossed paths with the KJV translators many times. Lancelot Andrewes, the prodigiously learned Dean of Westminster, was director of the first company of translators at Westminster (his ornery brother Roger was on the first Cambridge company). I and my students toured Westminster Abbey, where Andrewes and his team worked, in the “Jerusalem Chamber” where King Henry IV died, as described in Shakespeare’s play. We also went to Southwark Cathedral on the Southbank, which wasn’t a cathedral in the seventeenth century, but rather St. Saviour’s Church. The image above is of Lancelot Andrewes’s fabulous tomb in that church. Wherever you go in London, church and theater overlap. Also buried in Southwark Cathedral are playwrights John Fletcher (who collaborated with Shakespeare) and Philip Massinger, Philip Henslowe (who ran the Admiral’s Men), and Shakespeare’s younger brother Edmund. Many of the players at the Globe, the Rose, and other theaters, were members of St. Saviour’s. As Bishop of Winchester (from 1618), Andrewes’s palace was next door. He was probably often in St. Saviour’s, though after Shakespeare’s death in 1616. Long before then, however, Andrewes also preached regularly at the court of James I. Since the King’s Men often performed there too, he and Shakespeare may often have been under the same roof. James Shapiro writes about one such possible occasion at Richmond Palace during Lent in 1599. Shakespeare may not have worked on the King James Bible (more on this next week), but he certainly lived in the same city with men who did.

Off to Literary London! 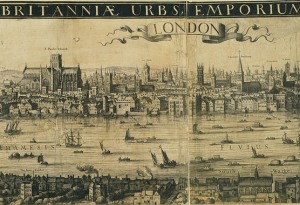 Well, I’m off to Londontown, UK, taking a class of undergraduates from Ohio State for a week-long trek through “Literary London.”

We’ll be standing on ground of huge importance to the making of the King James Bible and its subsequent history. We’ll tour Westminster Abbey, for instance, where two of the six teams of translators were ensconced; they worked in the Jerusalem Chamber, a location Shakespeare also mentions in Henry IV, Part 2. We’ll also visit St. Paul’s and Southwark Cathedral, where English Christians have heard the KJB read and sung for 400 years. Some of Shakespeare’s theater colleagues worshipped at Southwark (then St. Saviour), since it was near the Globe; his brother Edmund was buried there. The playwrights John Fletcher and Philip Massinger are also buried at Southwark, as is the great preacher Lancelot Andrewes, one of the KJB translators.

Our last two days are in Stratford, and we’ll visit Holy Trinity Church, where it’s possible Shakespeare himself heard readings from the then-new King James Bible. He retired to Stratford about the time the King James Bible was published, and this was supposed to be the Bible translation used in English Churches from then on. Whether Holy Trinity actually purchased and put to use copies of the KJB before Shakespeare’s death in 1616, I don’t know.