On February 2, central Pennsylvania welcomed the Manifold Greatness traveling exhibit to the High Library at Elizabethtown College. The reception has been overwhelming and we could not be happier with the enthusiasm and support for the exhibit. Even the weather has worked out in our favor and the programs have gone on without a hitch!

Our opening reception was attended by over 200 people, and attracted visitors from outside the area, including individuals from New Jersey and Maryland. To quote our keynote speaker for the event, Jeff Bach, the reception provided “a feast for the eyes in the exhibit and items from our special collections, a feast for the ears thanks to the glorious music provided by our student group Camerata who performed ancient acapella musical selections, a feast for the soul as the Word was read aloud, and our minds through the opening lecture.”

We also hosted a panel discussion on February 6 as scholars discussed “Shakespeare, Literature and the Language of the King James Bible.”  Speakers included Professors Christina Bucher, Louis Martin and Suzanne Webster. On February 7, we were mesmerized by our Elizabethtown’s own Professor Patricia Likos Ricci who lectured on “The Bible as a Work of Art.” Professor Ricci will replay this lecture  on February 19 at the Elizabethtown Public Library. We will also hear from our own Professor Jean-Paul Benowitz on Family Bibles. It has been wonderful to see and experience all the diverse backgrounds and generations who have visited the exhibit. We have had young, old, Mennonite, Brethren, Catholic, Baptist, and Protestant visiting the exhibit.  Our youngest tour thus far has been a group of middle school students who really enjoyed hearing about the Wicked Bible from our student docent, Annemarie. We also hosted a group of Old Order Amish who toured the exhibit with Professors Jeff Bach and Don Kraybill.

The Manifold Greatness exhibition has also provided an opportunity for the High Library special collections to be featured. We have displayed the High Library copy of the 1599 Geneva Bible, the rare 1712 Marburg Bible, and the Berleburg Bible. In addition to the unique displays, the visitors have also enjoyed using iPads we have setup to connect them directly with the audio tour of the exhibit provided by the Folger Shakespeare Library. We hope to continue to reap the rewards of the amazing exhibit and are looking forward to another fantastic 2 weeks with the King James Bible.

From Graceland to Shakespeare’s Globe, Our Top 10 Blog Posts of 2011

Succumbing to an irresistible urge, we’ve put together this list of the most-viewed posts from our Manifold Greatness blog to date this year. Seasoned online observers may not be surprised that mentions of Elvis Presley, debunked myths, and Bible printing errors earned high viewing statistics.

2) Taking the Stage at Shakespeare’s Glove (and beyond!). The 400th anniversary year of 2011 included countless full-length readings of the 1611 King James Bible, most famously for a full week on stage at Shakespeare’s Globe, described here. We later shared a great eyewitness report from Folger Education festivals project coordinator Carol Kelly, who was there on Easter Sunday. 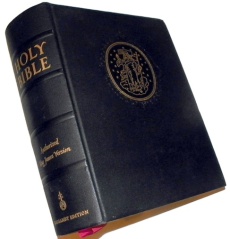 5) The Wicked Bible. The commandment “thou shalt not commit adultery” just isn’t the same without the word “not”! This famous printing error is the subject of another post by curator Steve Galbraith on what may have caused it, the consequences for the Bible printer, and the “wicked” challenge of locating this rare edition.

6) Hallelujah! Handel’s Messiah and the King James Bible. The words of the King James Bible may well be most familiar to audiences today from performances of this familiar oratorio, first noted in this blog post from the April 13 anniversary of its Dublin premiere. Folger Consort artistic director Bob Eisenstein recently shared this fascinating, fresh look at the Messiah, which one early admirer said was worth riding “40 miles in the wind and rain” to hear.

7) Gregory Peck Moby Dick Released Today — 1956. One of many literary works (and subsequent movies) deeply influenced by the King James Bible is Melville’s Moby-Dick, represented in this blog post by the classic film.

8) The First King James Bible in America? This Thanksgiving week post considers the King James Bible that came over on the Mayflower (this Bible, on loan from Pilgrim Hall,is in the Folger exhibition, too!)… and the open question of Bibles in Jamestown.

9) The Bible and Othello. This fall, Folger Theatre produced Othello, first performed in 1604, the year that work began on the King James Bible; scholars believe Shakespeare wrote Othello in 1603 or 1604. Curator Hannibal Hamlin writes about biblical (though not KJB-specific) connections to the play.

10) Discovering a “Judas Bible.” Curator Steve Galbraith writes on about another classic early King James Bible printing mistake—and on making a discovery within the Folger collection as the current exhibition was prepared.

Our thanks to everyone who contributed to the Manifold Greatness blog this year (see this full list of blog consultants and contributors) and to all of you who read our blog and created these rankings, one view at a time!  Manifold Greatness: The Creation and Afterlife of the King James Bible  will be open to the public, free of charge, at the Folger Shakespeare Library through January 16. (Holiday hours: The Folger exhibition will be closed on December 24 through 26, but will be open as usual on December 31, January 1, and January 2.)

Although I’ve been involved with my share of exhibitions, I’m always somehow surprised by how much work goes into them, from the planning stages through to the installation and de-installation.  Indeed, as I write this blog entry, I’m reminded that my colleagues at the Folger are hard at work with the installation, which happens to be one of the most intense parts of the process.  Hannibal Hamlin and I are deeply grateful for all of their efforts.

I think the most exciting part of the exhibition planning process is searching for artifacts to illustrate the exhibition’s narrative. Once there is an exhibition outline, it’s time to search the library catalog and hunt through the library vaults. The process is always one of discovery, through which you find amazing items that you may never have known about. Finding such incredible artifacts is always a thrilling moment.

Hannibal and I had a memorable “Ah-Ha!” moment while researching the so-called “Judas Bible.”  We had read that some copies of the 1613 folio edition of the King James Bible had a misprint in which “Jesus” was mistakenly set as “Judas” in Matthew 26:36. This misprint read: “Then commeth Judas with them unto a place called Gethsemane.” Substituting Judas for Jesus at this moment in the New Testament was clearly a significant mistake, though considering the similarity in the spelling of their names, one can understand how such a mistake was made.

When Hannibal and I pulled the Folger’s copy of the 1613 edition and opened it to Matthew 26:36, we saw “Then commeth Jesus.” At first glance, anyway.  To our great delight a second glance revealed that “Jesus” was actually printed onto a cancel slip that was glued over “Judas.” This was a fairly common way of making corrections in early modern books.  Hannibal and I were looking at a “Judas Bible.”  If you look closely at the image above, you can see the “J” of “Judas” peeking out from behind the “J” of “Jesus.”

The Folger’s “Judas Bible” will appear in the Folger’s Manifold Greatness exhibition alongside the “Wicked Bible” in a case called “Misprints and Misfortunes: Printing the King James Bible.”

Folger exhibitions draw primarily on Folger collections, but are often supplemented with items loaned from other libraries and museums. Most of the time the process goes smoothly, but every exhibition has its challenges. Manifold Greatness has had a few challenges, ranging from chasing down Bibles belonging to presidents and reggae musicians, to finding a pulpit and pew to put in the Great Hall.  Then there’s the Wicked Bible…

Perhaps the most famous (or infamous) edition of the King James Bible is an edition from 1631 that has come to be known as the “Wicked Bible” due to a rather outrageous typo in the ten commandments. Instead of having “Thou shalt not commit adultery,” the Wicked Bible has “Thou shalt commit adultery.” Quite a difference!  Even the King, Charles I, took notice and saw to it that the book’s printers, Robert Barker and Martin Lucas, were severely fined. Copies of the book were recalled and thus very few survive.

That very few copies survive made it a challenge for us to find one for the Folger exhibition. Finding a Wicked Bible turned out to be a rather wicked endeavor. After a few failed attempts, we finally found a copy with a willing lender: our partner in Manifold Greatness, the Bodleian Library at the University of Oxford!

A Visit to Oxford 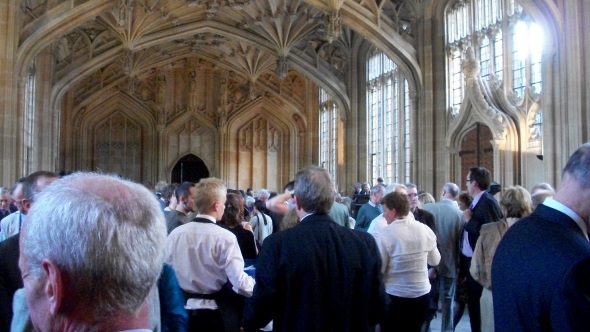 This past Friday, Folger Librarian Steve Enniss and I had the pleasure of traveling to Oxford to attend a reception celebrating the opening of the Bodleian Library’s exhibition “Manifold Greatness: Oxford and the Making of the King James Bible.” Guests gathered in Oxford’s majestic Divinity School for drinks, fellowship, and remarks from Bodley’s Librarian, Sarah Thomas, and comedian Ian Hislop, who was delightfully irreverent.

Prior to the reception, I made my way through the exhibition.  I was awestruck by the assembled artifacts.  I lingered over Anne Boleyn’s copy of the Tyndale New Testament and the Wicked Bible of 1631, with its infamous typo “Thou shalt commit adultery.” At one point I overheard someone whisper, “Have you seen the Big Three?” The “Big Three” to which she was referring are a copy of the 1602 Bishops’ Bible annotated by KJB translators, a manuscript containing working translations of the New Testament epistles, and surviving notes from translator John Bois.  “The Big Three” is a fitting title. On exhibition together for the first time, these three artifacts are primary documents recording the process behind the creation of the King James Bible.

The next day as we discussed the exhibition at the Turf Tavern, Steve noticed an ad for Manifold Greatness hung at the bottom of the tavern’s crowded wall of posters. I thought snapping a picture was in order.

We return invigorated and excited to continue work on the Folger exhibition coming this fall.