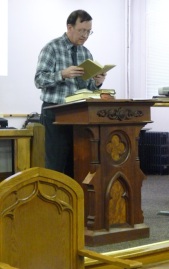 The Manifold Greatness traveling exhibit opened to great fanfare March 19 at Missouri Valley College’s Murrell Memorial Library in Marshall, Missouri. David L. Roberts, Assistant Professor of Mass Communication at the college, presented his slideshow, “A Best-Seller like No Other: The King James Bible and Its 400 Years of Influence.”

Students, faculty and community members attended the event and enjoyed not only the displays of historical Bibles, but also the displays of nativities, song books, and other church-related items.

Professor Roberts began his slideshow with the prose of the King James Bible. Comparing it to other and later versions of the Bible, the King James Version is poetic and sounds “pretty” when read aloud. One of the main points was that words sound better with an “eth” at the end. “Maketh,” “sayeth,” even “asseth!”

In the slideshow, Professor Roberts also pointed out some key elements of the Manifold Greatness exhibit. The influence of the King James Bible in popular literature, movies and music spans from children’s programming (A Charlie Brown Christmas) to more adult music (The Byrds.) Also, the King James Bible reached new heights when the creation story was read by Apollo 8 astronauts as they rounded the moon.

Murrell Library is looking forward to several more speakers, fun activities, and even hosting a Last Feast reception during the Manifold Greatness exhibit.

I Swear It’s Not Too Late

Forty-six years ago today, the Byrds released their second album, Turn! Turn! Turn! The album’s title track is a folk rock interpretation of a song Pete Seeger had written in 1956 based on Book of Ecclesiastes 3:1 as translated in the King James Bible. Seeger’s adaptation was popular among the artists of the early 60s folk scene, but when the Byrds applied their groundbreaking folk rock sound to the song, it soared to #1 on the charts in the U.S.

Over the decades, the popularity of the Byrds’ version has not only continued but the recording has become a powerful cultural landmark. The opening jangle of Roger McGuinn’s 12-string Rickenbacker is a sound that immediately evokes the turbulent times of the 1960s. The song’s concluding appeal for peace, “I swear it’s not too late” (Seeger’s original contribution to the lyrics), will be forever linked with the Vietnam War. Yet the song and its message remain somehow timeless, an unlikely collaboration spanning the centuries between the King James Bible translators, Seeger, and McGuinn.