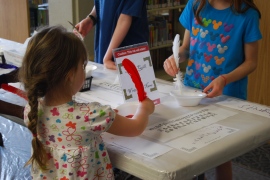 On March 8, the City of Tuscaloosa welcomed the Manifold Greatness traveling exhibit to the Tuscaloosa Public Library, a highly anticipated event in a region that lies in the heart of the Bible Belt.

Five displays, which were curated by the library, are scattered throughout the building to enhance the Manifold Greatness experience. These displays offer visitors the chance to experience physical representations of the topics discussed within the Manifold Greatness exhibit, such as the history of books, papermaking, bookmaking, the literary influence of the King James Bible, and what the Bible has become today.

Our family-friendly opening reception was held Sunday, March 10. Attendees were given the chance to peruse the exhibit while enjoying the classical music of Handel’s Messiah and partaking of light refreshments. The keynote speaker, Dr. L. Jeffrey Weddle, Associate Professor at the University of Alabama, introduced the history of the first English Bibles through William Tyndale’s version during his presentation, entitled “William Tyndale: How His Bible Translation Changed the Reformation and Led to the King James Version.”

As an added bonus, the Children’s Department gave patrons a guided tour through the history of bookmaking, starting with a discussion of early bookmaking and the various materials that have been used to make books, followed by a feather quill making activity. After reading the story The Ink Garden of Brother Theophane by C.M. Millen, participants saw a demonstration of making blackberry ink and were able to use their new quills to sign their names.

From there, they were offered the opportunity to hear from Christopher Davenport and Laura Rowley, students from the University of Alabama Book Arts Department, with lessons and hands-on activities on letterpress printing, bookmaking, and papermaking.

In the coming weeks, the library is looking forward to the many special groups scheduled to attend the exhibit and will be hosting two additional programs geared towards engaging our community in the history and influence that the creation of the King James Version had on the world.

As readers of this blog well know—most recently through a behind-the-scenes account from Folger exhibitions manager Caryn Lazzuri—opening day is nearly here for the Folger Shakespeare Library exhibition Manifold Greatness: The Creation and Afterlife of the King James Bible. Open to the public starting this Friday, September 23, the exhibition draws together rare materials from the Folger collection and from some 14 individuals and institutions, including the Folger’s partner in the overall Manifold Greatness project, the Bodleian Library at the University of Oxford.

According to a Folger Shakespeare Library press release, “through materials from the year 1000 to 2011, Manifold Greatness: The Creation and Afterlife of the King James Bible offers a “biography” of one of the world’s most famous books, the King James Bible of 1611, which marks its 400th anniversary this year.”

A blockbuster, NEH-funded exhibition, Manifold Greatness “traces the centuries-long narrative of the King James Bible and the English Bibles that came before it. The exhibition also shows how its words have played out over the centuries since 1611, from Handel’s Messiah and countless works of literature to the Apollo 8 astronauts’ reading of Genesis as they orbited the Moon.

“The legacy of the King James Bible is actually too huge to articulate in a brief sentence or two, because its influence is astronomical,” notes exhibition curator Steven Galbraith. Fellow curator Hannibal Hamlin adds, “It influenced English-speaking writers, not just in Britain and America, but all over the world. Everybody from John Milton in Paradise Lost to Charles Schultz in A Charlie Brown Christmas—it’s the King James Bible.” 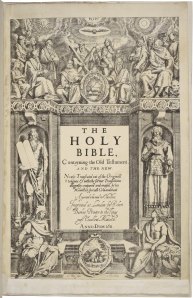 Some of the many extraordinary items on exhibition include:

• An Anglo-Saxon manuscript from about the year 1000 that retells biblical stories in epic verse; the manuscript’s drawing shows God creating Eve from Adam’s rib

• A rare Wycliffite Bible from the 1380s

• A 1530 fragment from William Tyndale’s contraband biblical translations, discussed by Hannibal Hamlin in this recent post: Tyndale was executed in 1536

• The Folger first edition of the King James Bible

• A King James Bible that came over on the Mayflower

• Early family Bibles, with century-old handwritten records of births, christenings, and other events

Due to the interest in the King James Bible this anniversary year, the Folger is adding Sunday viewing hours from noon to 5pm. Manifold Greatness can also be seen Monday through Saturday, 10am to 5pm, and one hour before performances and readings. 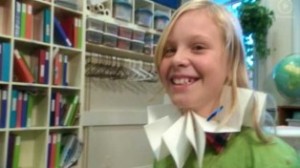 More than a year in the making, the site includes stunning image galleries ranging from Early Bibles to Modern Life, interactive timelines, original video interviews, and still more special features that allow you to compare translations side by side, examine pages of a 1611 King James Bible in depth, and listen to excerpts from Handel’s Messiah, which takes much of its text from the KJB. (Special bonus: the recordings are from a Folger Consort / Oxford (Magdalen College) performance!) Resources for Scholars guide academic researchers to rare books and other source materials.

Children’s and family pages include a wealth of images, information, new craft videos, games and activities, and more—the screenshot we’ve highlighted here is from Making a Ruff. Trust us, we could go on… but why read about it when you can explore it for yourself? Consider this your personal invitation to jump into the new website today. We’re so happy to share it with you.

The website is part of Manifold Greatness, a multi-faceted project of the Folger Shakespeare Library and the Bodleian Library of the University of Oxford, with assistance from the Harry Ransom Center of the University of Texas at Austin. It has been made possible in part by a major grant from the National Endowment for the Humanities.